Another day in the grinder! Lol, all joking aside, I am loving what I’m doing but it is tiring NO DOUBT!! Ryan woke up early with me to head on down to Coach Club to check out one of my workouts! There was a freeze this morning so one of the camera guys was very late and we ended up waiting around for about an hour before we got started but it was nice to have Ryan come and check out what I've been up to.

I was feeling pretty cruddy this morning but trying to hang in there and stay positiveJ We shot the first one (workout #16) and it went pretty well! Just after we did the run through for the second workout of the day right before we went to film it the boom/crane camera went out. Well let me clarify: the camera itself was working but the tilt function on it stopped working, they think the motor went caput on it. So we had to shift some things around in order to accommodate the rest of the day.

We got through workout #17 and I was feeling TIRED and stuffy through lunch. I have this little trick where if you’re suuuper stuffed up you literally sniff up hot water through your nose. It’s super uncomfortable and it makes you cough and it feels terrible but it really loosens everything up and allows you to breathe. I didn’t really care that I was so stuffed up but it was making me sound really nasally on camera lol! So I had to set aside about 10 minutes after lunch to get all raunchy with the water up the nose trick reapply my makeup and get back to it but ….BINGO! It did the trick! I also FINALLY got my hands on some cold medicine during lunch with Akil my interpreter.

BAM! Done with workout three and then we did 10 technical segments. Walking home in the rain I realized I forgot to mention something very interesting about Parisians. Despite the fact that the majority of what they eat is either soaked in butter and fat, bleached white pasta and bread or super fatty meats and cheeses, they are all for the most part very thin. They also walk INCREDIBLY fast!! I noticed it right when I got off of the plane in fact. Ryan and I were walking up this really steep ramp at the airport just after exiting the plane and there was this super old couple in front of us that were just HOOFIN’ it up the ramp! I felt like a fat lazy cow! I mean these old folks weren’t joking around! And that’s how most Parisians are….walking at lightning speed everywhere they go….always in a super hurry. Combine that with the fact that they all smoke like chimneys and it’s no wonder they’re so darn skinny! Ha!

Well we were supposed to be filming some teaser footage tomorrow along with interviews and some technical movements, so I was really looking forward to a physically relaxing day but now because the crane camera is broken we have to film three more workouts tomorrow….boo!! Oh well, hey we’ll be more than 2/3rd  of the way done by tomorrow!!! I keep joking that this is going to be my most fit Christmas everJ  Speaking of Christmas, I finally attached a pic of our little Christmas tree that the owner of our flat set up for us. On either side are our Christmas stockings that I insisted we bring from home since I am such a Christmas fiend I HAD to have something to remind me of home!:) 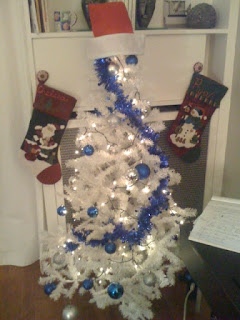 Anyhow, I am really looking forward to getting some quality sleep here so I’m heading off to bed now. Until tomorrow….

Welcome to my BLOG!

I hope I can write some interesting things for you folks out there to enjoy and give me feedback about:)
I don't know about you but I like to find out the REAL things that happen to people in life, the pitfalls, the joyous occasions, the triumphs and failures.....I think that's how you really get to see into the true essence of a person, so I hope I can give that here on my blog.